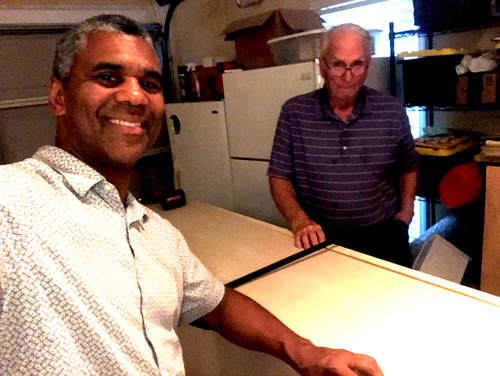 Evangelist to Travel America with

Altar in Tow for People to Pray

Montgomery, AL June 30, 2020 -. Evangelist William Owens to travel America with an altar in tow for people to pray for the healing of the nation starting from downtown Montgomery.

Starting at 10 AM on Thursday, July 2, across from the fountain next to where Rosa Parks stands, an 8-foot long and high altar will be set up for people to pray for America. It is being done by the same man who walked from Montgomery, AL, to Selma, AL, praying for America for 11 days last Thanksgiving. He is now taking prayer on the road by pulling a custom-built altar behind his motorhome throughout America, making stops in various locations, and setting it up. People are invited to kneel and pray for themselves, for the nation and even their enemies. It’s called “America’s Altar.” (www.americasaltar.org).

William Owens, founder and president of America’s Altar, a non-profit organization, believes people of faith have an unprecedented opportunity during this excruciating and troubling time to lead the nation to pray. The vision is to provide a none intrusive way for people to kneel and present their hearts to God. It is William’s conviction that only God can bring healing to broken hearts. Unless God-fearing Americans publicly display their faith, hope, and demonstrate forgiveness, they willfully surrender the most potent weapon they have: earnest prayer to God.

William explains, ‘There are 330 million citizens in America, and the vast majority express faith in God. While our denominations and doctrinal emphasis are different, we all agree that God will receive prayer from a sincere heart”. He further explains, “If the Churches of America continue to remain passively quiet during these times of deep divide, we have no right to blame those who are reacting with violence and destruction – because our silence is consent.”

William arrived in Montgomery approximately three weeks ago and had lunch with retired Lit. Colonel Chuck Carver. They had become friends before William’s walk from Montgomery to Selma. It was over lunch that William shared the vision of America’s Altar that Chuck (83 years old) without hesitation, said, “I can build that.” That was all it took, and starting the very next day, Chuck and William begin to draw out ideas and headed to Home Depot to buy the wood – on Chuck’s dime. Just about every day, they have been working on the Altar from Chuck’s garage, and his wife Lis has been just as encouraging.

The Altar is complete, and the banner will be done this week. The Altar will be the first with many more to come. William is inviting other ministers who have a burden for America to team up with the vision. Altars will set up in cities and states at various locations. A crowdfunding page has also been launched and has almost raised $1,000.

After Montgomery, William will be headed to Selma, Birmingham, Tupelo, Memphis and other cities will be added weekly.  If you are interested in attending to pray, participate as a minister, or supporting America’s Altar, you can visit www.americasaltar.org or www.fb.com/americasaltar to learn more.